I contemplated purchasing a ticket for Gregory Porter for a long time. At least a few months. I finally bit the bullet after listening to a few of his concerts on youtube. I knew I would kick myself for not going. I even booked a trip after the show and just planned around it. I had to see him. Apparently, Houston finally got the memo as the show was sold out.

Gregory opened with one of my favorite songs, On my way to Harlem and Be Good. I was thinking where are we going to go from here. You already sang my favorites. Yet, the show continued to be great as time went on. Gregory finds a way to bring you into each song as if it is a new one.  Everything about his performance is intriguing, especially his background behind the story.

One would think that Gregory is from NYC (though he lives there now). Yet, the fact that he is a native of Bakersfield, California threw me entirely off. To  throw my bias of what a jazz musician should have as a background further, he is a former football player. Gregory was determined to be a professional athlete until he had an injury while playing at  San Diego State University, where he had a full athletic scholarship.

Yet, it was not until his mother who was terminally ill asked him to sing professionally that he took her advice. Though he sang in the church most of his life, he is what we call a “late bloomer.” Thank God not too late. Gregory’s success reflects the fact that it is never too late to live in your purpose.  He is a talent much needed in the mundane world of music today. In addition, his live performance engages you even more than listening at home.

I am so happy we were able to experience Gregory in Houston and though it took him a while to get here, we hope he is back soon.

“Power concedes nothing without a demand. It never did and it never will.”-Frederick Douglas

Today is the first day of Black History month and Google has created a doodle of Frederick Douglas. His quote is very fitting as it summarizes the theme of the play All the Way by Robert Schenkkan. All the Way covers the 18 months of Lyndon B. Johnson’s campaign for re-election. Throughout the entire show, he constantly negotiated with all types of players in order to gain votes for re-election, despite events surrounding him.

Lyndon B. Johnson was the Vice-President during John F. Kennedy’s term and was forced to be President after Kennedy’s assassination. Unfortunately, President Johnson served a small space in my memory when I think about American history. I am not a native Texan and am very weak in our history (working on that), yet, it is interesting how much more I grew up knowing about John F. Kennedy, especially as his family had homes in my hometown.

Watching the movie Selma last year was my first glimpse of Johnson and his role with the Civil Rights Movement. It was not until the movie that I realized that Dr. Martin Luther King, Jr. made several trips to the White House during LBJ’s tenure. Though Selma’s focus was the movement, the play All the Way focused more on Johnson’s re-election.

Despite campaigning from 1963, there were too many things going on in America that could not be ignored. From the country mourning Kennedy’s death to the violence embarked on African-Americans fighting for equality, there was not a dull moment from the day Johnson took office. All the Way did a phenomanal job capturing all of these events while shedding light on LBJ as an everyday human being.

During intermission, I asked an audience member who was a child during the LBJ era if she thought the show was depicting the sequence of events accurately. She recalled though she was young, it is an accurate depiction. She felt LBJ was known for “wheeling and dealing.”

All the way has forced me to dig a bit deeper into the time period of the eclipse of the Civil Rights Movement. It is very interesting how many of the topics are still being argued today, equity in human rights. Yet, many of the results boil down to the ability to vote. In our country, the right to vote is the most effective way to be heard. All the Way also reflected on the fact that though we vote as individuals, it takes a collective power to demand results for true change.

All the Way is a great show and it is clear why it was awarded the Tony award in 2014. It runs at the Alley Theater through February 21st.

“I write about black girls because this world would like to keep us invisible.” –Jacqueline Woodson

Yesterday we had the privilige of hearing Jacqueline Woodson, multi-awarded author, share her work and life story with us. We gathered at the Johnston Middle School in Houston to be enchanted about Jacqueline’s life experiences. No one could ever tell us she was 52 years of age by her appearance, but the moment we received a glimpse of her wisdom, we knew that it must have come with time.

It was amazing to see an audience diverse in gender, race and age. The excitement of the students was immeasurable. Ms. Woodson was unapologetic about her authenticity. The richness of her experiences reminded me a lot of myself.

She shared with us about oral history she learned where one of her relatives was a soldier in the Civil War and her angst when she was with NPR at the Civil War museum. The reporter covering her story went ahead of her to look for her relative’s name. She had anxiety as she never verified the story that was passed along orally in her family. Thankfully, the oral history aligned with written. A common misfortune in African-American history is that our history is rarely documented. I felt the same way when I learned I was related to a founder of Morris Brown College. It was not until I saw his name and picture in a book that I finally believed it was true. My family is also blessed that he wrote several books (despite being born into slavery).

Jacqueline shared many nuggets of wisdom while reading her work to us. One that stood out clearly was the disclipline it takes to be a writer. As soon as her children are off to school, she begins writing, often several stories simulataneously. Another tip she provided was that in order to be an effective writer, you must also read just as much. If you are a poet, you should read poetry ferverently for example. It is interesting how we think artists wake up and magically perfect their art. Often, it is from years and years of dedicated work that is often unnoticed. 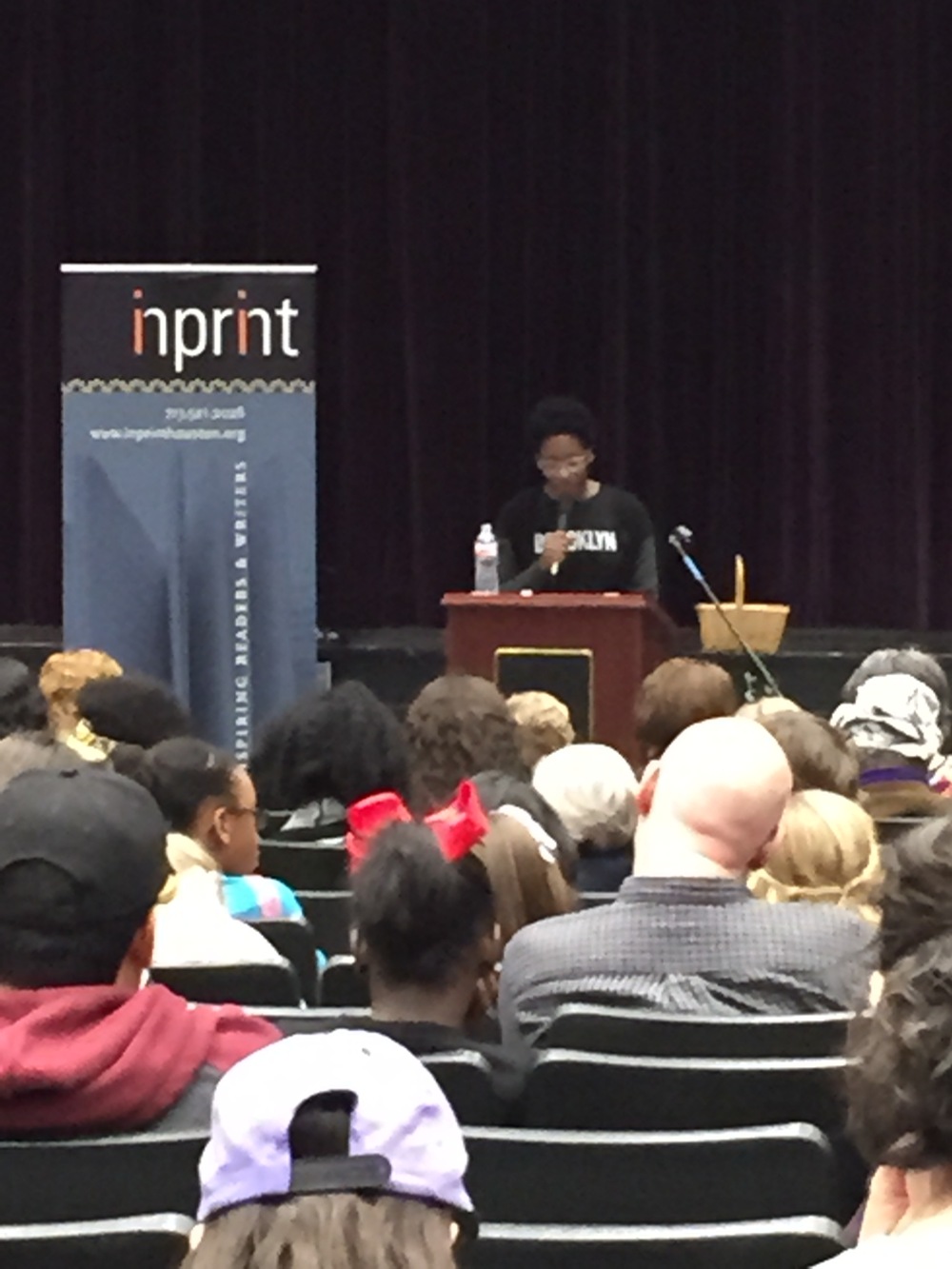 What an honor it was to have Jacqueline in Houston. She inspired the entire audience to live their dream to the fullest. She encouraged us to support our children’s dreams despite our agreement with them. So, the next time my brilliant son mentions he wants to be an NBA player, I will smile as suggested and only nod.

I received an email the other day from the Hobby Center for the Performing Arts asking if I would be interested in entering a ticket lottery. I have not been very up to date on new Broadway shows, but Bullets over Broadway sounded like an interesting title. I indicated dates I would be able to attend and waited on results.

I was notified that I did not make the lottery for my first choice and I didn’t think twice about it. I still was not dying to see a show I had never heard. Yesterday, I received a note that I had been granted lottery tickets for the Saturday matinee, my second choice. I jumped on it.

The tickets were $25 and I am pretty sure the market price was in the $80 range. I chose a seat in the center orchestra and looked forward to a show that was still a mystery to me (my specialty).

Unfortunately, I hit some very bad traffic on 59S and arrived at 1:59pm for the 2pm call. I had no choice but to use valet. For $20, I must admit that it is one of the most efficient valet systems I have ever seen. After the show, I was about 7th in line and my car was to me in about 7 minutes. It was a very well organized machine. There is no way, I would see a show and park and for $45 in NYC. Back to the show.

I see Woody Allen on the credits and immediately know two things will be discussed: sex and relationships. The audience advisory stated you should be 13 and up but I would advise at least 18. Though, the language was slightly subtle, I think it is a bit much for the average teenager.  Yet, I rarely watch tv so I may be sheltered a bit.

The cast was no doubt talented. Though the show got off to a slow start, it was not long before some drama hit. A play about a play is always fascinating to me. Incorporating some mafia interactions definitely did not leave a dull moment.

The set changes and costumes were flawless. There were many moments when I forgot I was watching a show. Everyone was believable and I began imagining I was there…in the 20s, NYC along with the cast. It was awesome to see some vintage dancing including the Charleston, soft shoe and a bit of tap.

There is only one more show at Hobby Center tonight at 8pm.  I definitely recommend it if you are in the area. Duration is about 3 hours though so make sure you are ready for the long haul.